This story is about a bike… or, more accurately, three bikes. And three theives that are now in possession of said bikes. Suffice to say, my 31st year of life has started off a little wobbly.

My home in East Vancouver is not new to the bicycle theft game; the second most recent event being the theft of my girlfriends’ bike from our back yard this past summer and the most recent being my bike that was taken from the same spot a week ago today. It should be noted that our backyard is not exactly a thoroughfare and that the bikes are not redily visible from the street or alley, but that hasn’t prevent people from sneaking into our yard late at night and checking to see if there as bikes to steal. This aspect is by far the most unnerving and angering – that there is someone regularly entering our yard with the intention of theft. And I say regularly beacuse the night my bike was stolen was the first night in 6 months that I didn’t lock it up. So yes, as unsettling as it is, someone is scoping houses with the intention of stealing bikes. 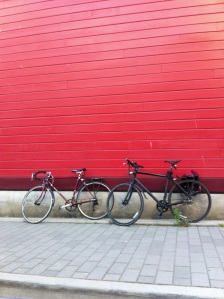 To anyone that lives in or knows Vancouver, this shouldn’t come as a surprise: bikes get stolen on a regular basis. There are several excellent articles out there examining the causes and extent of this problem, but basically there needs to be opportunity (lots of bikes around the city), a perpetrator (someone willing to brazenly break the law) and a market for the stolen goods (craigslist, pawn shops and various bike markets around the DTES). Understanding the larger issue, however, has done little ease my mind. For anyone that loves bikes or has had one stolen, the frustration and anger should be palpable in my words… I had an emotional attachment to this material object that I spent hundreds, if not thousands, of hours on in the saddle. The loss was saddening, frustrating, and disappointing with a sprinke of rage and disbelief.

However, the real crappy icing on this crappy bike theft cake is that my generous friend Adam loaned me a bike right after mine was stolen and I managed to salvage a week’s worth of glorious sun-filled commutes to work. This isn’t the crappy icing, this was awesome. Until yesterday, when someone went through extreme efforts to break into the keycard-secured, underground bike room in the parkade of my office tower. Actually, they broke into an adjecent bike room, smashed a huge mental vent/grate thingy through the wall into our bike room, and then made of with my loaner bike. Two bikes gone in less than a week, and through completely different scenarios. Sorry Adam.

Through my searches, both on craigslist and the streets of Vancouver, I started to realize some seriously negative thoughts rushing through my brain… Every cyclist was a potential theif, whether they looked respectable or sketchy, wealthy or poor, tall or short. Basically, my mind was racing to negative conclusions about people I had never met. I was infurated at the people that would steal a bike (a particularly offensive form of theft). I was frustrated with the police for not doing more or caring more. I was angry with myself, as it was my own damn fault for leaving the bike unlocked. It was only after reflecting on all of this that I have finally started to make peace with myself, but I still find myself scrutinizing oncoming riders along bike routes and scanning local bikes racks hoping for a glimpse of my trusty steed.

The silver lining to the shenanigans of the past week was all the support and condolance from everyone I encountered. Many people took the time to relate their own bike theft stories and to offer advice, suggestions and support. I’m hesitant to say that I went through dark times this week (as I’m still so happy to have my health, family and friends), but there were definitely some dim times. And curses. And dreams of redemption through reunion, which is still not out of the picture.

Unfortunately, there isn’t much in the way of a conclusion to this – yet. I’m still scanning craigslist ads, I’m still staring at similar looking bikes riding around and I’m still enraged at the thought of someone sulking through my yard while I’m asleep. I am, however, in a pretty good mood. Money flows like the tides: in and out, back and forth, over and over. And far more important than money are the people the surround us. Friends, family, bike loaners, story-tellers, co-workers, security guards and even the painfully desparate scumbags that stole two bikes in a week. Justice or not, I will choose to move on and get another bike, while the theives continue to sneak and trespass and steal – probably not by choice.

Where do we go from here? Wherever we want, beacuse the moral of  the story –

Appreciate what you have while you have it, and LOCK UP YOUR BIKE(S)!

One thought on “Story about a bike…”